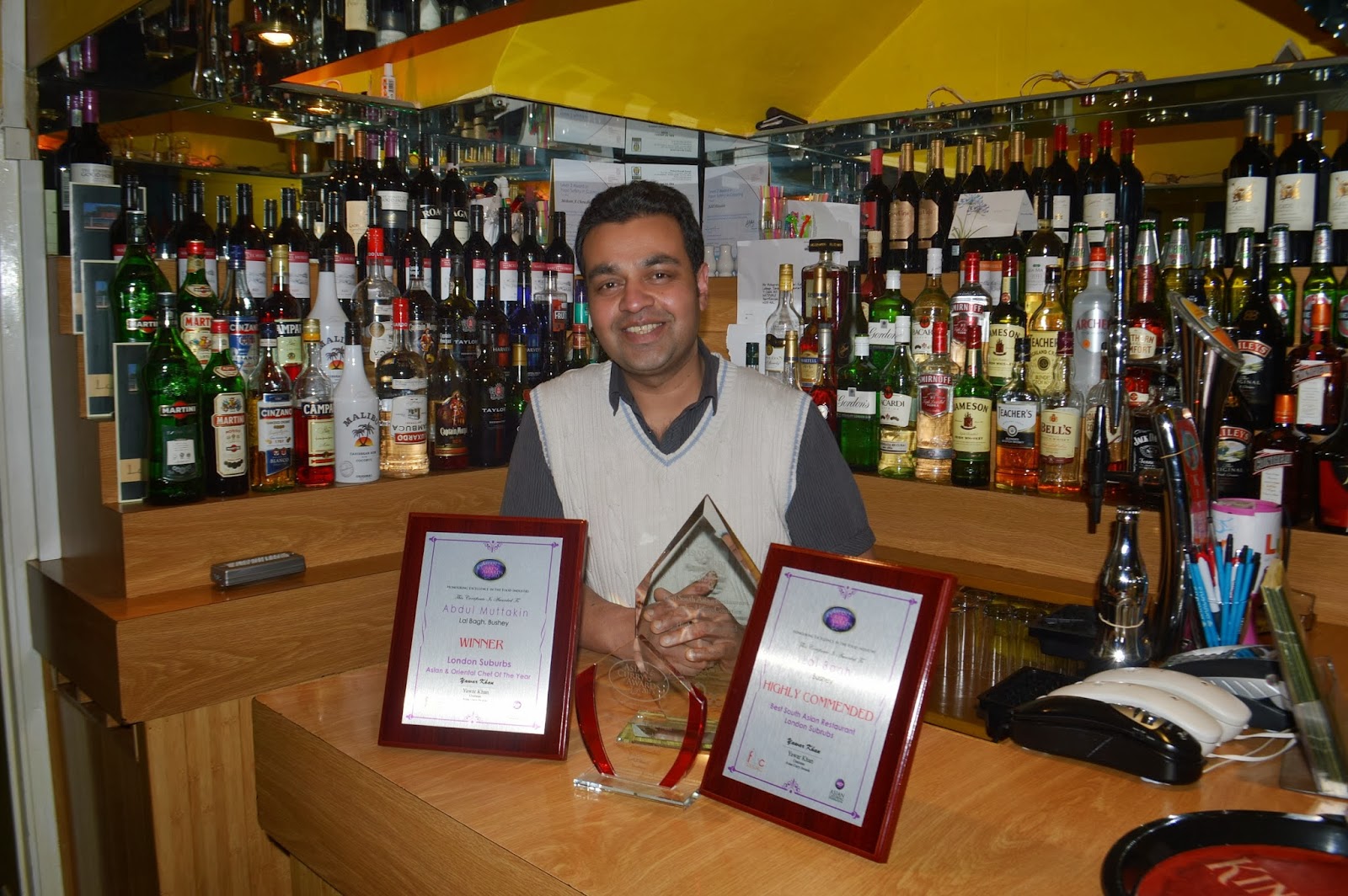 Owner Martin Miah has also revealed that the 40-seater Chalk Hill restaurant will be serving a special Valentine’s menu with dishes utilising Indian spices noted for their aphrodisiac qualities.

The evening was hosted by Sky TV’s Lukwesa Burak with Prime Minister David Cameron and Deputy PM Nick Clegg both delivering messages of support by video link to the nation’s 35,000 Asian caterers.  Her Majesty the Queen also sent a message of support. Awards were presented by high profile guests including Secretary of State the Rt Hon Eric Pickles, MP.

Lal Bagh was honoured at awards because of their, “Stylish presentation, with delicately flavoured mouth watering dishes, and superb silky sauces, using the finest and freshest ingredients available,” according to Asian Curry Awards Chairman, Yawar Khan.

On Friday and Saturday 14th and 15th November, Lal Bagh will serve a special menu where the dishes contain Indian herbs and spices known for their aphrodisiac properties, priced at £59.50 per couple.  The 3-course Valentine’s menu comprises King Prawn Special and Lamb Mono to start; main dishes of Ginger Chicken Pepper Fry and Tava Chicken; with Sag Chana and Bombay Aloo side dishes, accompanied by Pilau rice and a plain Nan bread; a choice of two desserts plus a bottle of rosé white.

Recognising the change in customer dinning patterns, away from heavier curries following a lengthy session, Lal Bagh is redesigning its menu in response to the latest customer-led trends in Indian dining.

“All restaurants need to move with them times and we update our menus every year,” said Lal Burgh head chef Abdul Mutakin, adding, “We will shorten the menu to maintain the highest quality cooking standards, but will keep customers’ favourite dishes, whilst introducing more fine dining options.

Aphrodisiacs in Indian cookery:   Celery contains the male hormone androsterone and is thought to stimulate female libido as do carrots and fennel.  Onions and garlic have such effect on the sex drive that they are forbidden in Brahman cooking. Ashwagandha,  “the king” of Indian herbs, effects the reproductive and nervous systems and boosts energy.

Basil is said to stimulate circulation, boost fertility and producing a general sense of well being. Rasam, a South Indian sea food extract contains zinc, known to boost male potency and stimulate female desire.  Asafoetida, widely regarded in India as an aphrodisiac, has compared favourably in laboratory studies with sildenafil, better known by the brand name Viagra. Ginger is mentioned in Chapter 7 of the Karma Sutra which maintains that success in love can be improved by “aphrodisiacs, herbs, and spells.

In Chinese medicine, coriander is renowned for its mystical aphrodisiac potency and is used in love potions. In Arab culture nutmeg has been used to treat digestive problems and is also been valued as an aphrodisiac. Hindus embraced the spice for its more sensual properties as a stimulant and raising body heat, sweetening breath and acting as a mild sedative. Coconut and tamarind seeds are also thought to improve sexual potency and fertility.  Betel leaf is prescribed by ancient Ayurvedic physicians as an aphrodisiac for its invigorating properties and is used as form a part of the ritual with which a wife welcomes her new husband.

Cardamom contains at least two androgenic compounds. It shows up as the best source of the compound cineole. Cineole is a central nervous system stimulant, and people have a way of thinking that any stimulation is sexual stimulation.  Traditionally revered for its “magical property” of  enhancing  “lust”. Modern science shows that saffron is capable of affecting the brain’s neurotransmitters, and acting as a soothing relaxant capable, lowering blood pressure and stimulating the respiration, releasing the body’s natural pheromones.

The Asian Curry Awards are a joint initiative from the Federation of Bangladeshi Caterers and the Asian Caterers Federation which represent over 35,000 restaurants and takeaways in the UK.
W: www.asiancurryawards.co.uk