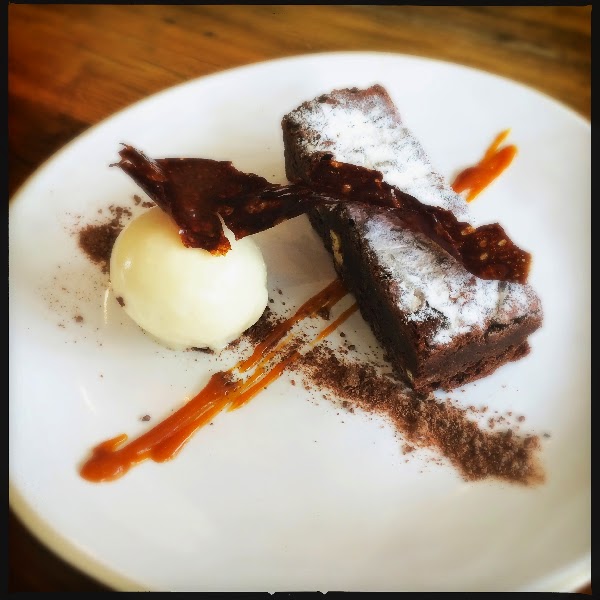 Saltwood on the Green restaurant, near Hythe in Kent, is backing the NSPCC's annual fund raising Garden & Plant Fair at Saltwood Castle on Saturday 2 May, by putting a special Chocolate Brownie dish on its menu.

The restaurant will donate proceeds of the £5 dish sold all week from 2 May to the charity.
“Being an American, I come from a land where chocolate brownies have near religious status, and these ones come guilt-free as they're all for a very good cause,” said Saltwood on the Green chef-owner Jeff Kipp, adding, “These are a favourite of mine.”
Chef Jeff's chocolate brownie recipe is a tantalising creation with malted ice cream with a caramelised chocolate sauce.

Saltwood on the Green is fast gaining a reputation simple, but exciting, cooking with an emphasis on light bites and sharing plates. Kipp creates enticing modern British dishes with a contemporary American twist, utilising the best the abundance of local ingredients from carefully chosen producers.

Before opening this, his first restaurant, Jeff learned his trade working in some of the world's best kitchens, including the famed Charlie Trotter's in Chicago and Gordon Ramsay's three Michelin-starred restaurant in Chelsea.  He has also held exec chef roles at top London restaurants including Duck & Waffle and SushiSamba and global food home delivery company, Deliverance.

The Garden & Plant Fair offers visitor a unique opportunity to see inside the grounds of the historic SaltwoodCastle, the former home of historian and author the late Rt Hon Alan Clark MP, which is not normally opened to the public. The event, now in its 13th year, is held by king permission of Alan's widow, Jane Clark, who owns the restaurant's freehold.  Last year the fair raised £12,000 for vulnerable children and funding for confidential Childline support.
As well as having more than 20 stalls to browse, visitors can also  explore the picturesque castle's moat, dungeons, battlements and secret garden, as well as seeing Alan Clark's classic car collection. Refreshments will available.

Saltwood Castle, Hythe, Kent CT21 4QU. Entry costs £6 on the door and is free for under 16s. The event lasts 10.00am to 4.00pm.  Parking is free but limited.  Details at www.nspcc.org.uk/what-you-can-do/events/saltwood-castle-plant-fair and www.saltwoodcastle.com.