The Red Lion Great Sausage Roll Off Is Back For 2014 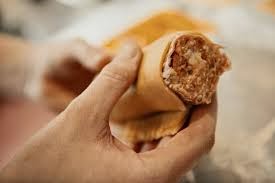 After the success of the inaugural event last January, Claire Morgan & Angus McKean of The Red Lion, Barnes are hosting their second "Great Sausage Roll Off" on January 28. The contest is a simple one, an invitation to chefs from London and beyond to create the ultimate sausage roll.

Once again, the competition will be expertly compered by good friend and local of The Red Lion, beer and food writer Melissa Cole. Last year's competition saw some chefs using rather ambitious flavour combinations and others using luxury ingredients such as truffles, lobster and even mackerel.

The more outlandish creations were given the thumbs-down by judges Kate Spicer of The Sunday Times, MasterChef judge and writer Charles Campion and chef and restaurateur Johnny Mountain. To the shame of the English chefs competing, the trophy for this most British of delicacies was carried off by a Frenchman.

This year the competition boasts MasterChef winners both amongst the competitors and the judges, with returning head judge Charles Campion being joined by celebrity MasterChef winner Lisa Faulkner. Tim Anderson, the 2011 MasterChef winner who is now running Japanese restaurant NanBan, will be one of the contestants vying to wrench the trophy from the hands of its current holder, The Masons Arms in Battersea.

Completing the line up of expert judges are National Chef of the year Hayden Groves and food blogger Danny Kingston aka Food Urchin.

Other confirmed entrants are prestigious pubs such as The Wykenham Arms in Winchester , The Bull in Highgate, Chef Paul Merrett's The Victoria in East Sheen, The Malt House in Fulham, The newly opened Running Horse in Mayfair, The Cricketers in Hartley Wintney and Salt Yard's Famous Opera Tavern to name a few.

Angus McKean commented: "Everyone loves a sausage roll - and last year's selection was a combination of delicious, interesting and, quite frankly, just odd. I'm hoping for more of the same this year.

"I'm very proud of our food in the Red Lion and it's an inspiring experience to allow other chefs on to my turf to fight it out for Britain's most superb sausage roll."

What promises to be a very enjoyable evening will start at 7pm and spectators will be able to sample some sausage rolls from each competing chef as they emerge from the kitchen. There's no need for tickets - just turn up to grab a spot.


- This year's Roll Off is brought to you in conjunction with Heineken UK, Chase Distillery, Fuller's , Fentimans, BLOK knives, Rational UK LTD & Tracklments Mustard.
Events and happenings Pubs and Bars