A Real Life Fairy(Cake) Tale: The Story Of Cookie Girl 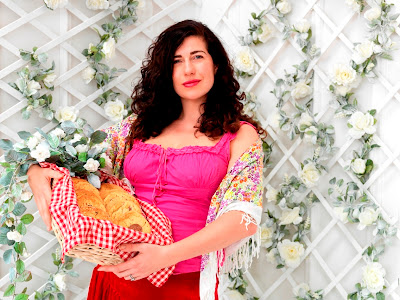 Xanthe Milton is better known as Cookie Girl, London's favourite baker who specialises in teaching people to bake and decorate cupcakes.  Xanthe shot to fame when she started her own cookie and cupcake businesses nearly six years ago in her native Notting Hill, London.  She went on to release her top twenty bestselling book, 'Eat Me! The stupendous self raising world of cupcakes and bakes according to Cookie Girl' and is a youtube sensation with over 3 million views!  She will be appearing at Cake International - The Sugarcraft, Cake Decorating & Baking Show at ExCeL, London from 12-14 April.

Xanthe's fairytale story started when she was a little girl when she well and truly caught the baking bug.  One of her first memories of baking came when she climbed a ladder to retrieve her recipe book so she could satisfy her sweet tooth on a day off school, creating a perfectly risen batch of cupcakes.  She quickly moved on to create technical masterpieces such as soufflés by the age of eight; it was then that Xanthe knew she had a talent for baking!

Deciding in 2006 to turn her talent into a career, Xanthe baked 100 cookies from an initial £10 investment for ingredients and went to entice local businesses to buy them.  Following a shaky start, she soon sold out of all the cookies and Cookie Girl was created!  She soon brought cupcakes into her repertoire and was in demand outside of her patch of London, visiting Soho, Poland Street and central London and could count Damon Albarn, Will Young, Josh Hartnett, James Morrison and Belinda Carlisle among her customers.
Her fan base following soon grew with the help of her blog, Cookie Chronicles, helping to catapult her to become the go-to baker for a-list parties and fashion shows, with Cookie Girl even launching in Selfridges and having fans from across the world, including Hong Kong, the Middle East and Europe.

Crediting her success on the rise of the homebaking trend, Xanthe prides herself on the quality of her bakes, concentrating on traditional flavours and using the highest quality ingredients.  Xanthe has shared one of her favourite recipe with us, Red Velvet Cupcakes!

Soft Cheese Frosting
110 g/4 oz soft cheese, room temperature
85 g/3 oz butter, room temperature
12 ounces sifted powdered sugar
Seeds scraped from ½ a vanilla pod
1 tsp vanilla extract
Coloured sprinkles to decorate
Preheat the oven to 180C/350F/Gas 4. Line a 12-hole non-stick muffin tray with paper cases.
Sift the flour, cocoa powder, bicarbonate of soda, baking powder (or cream of tartar), and salt into medium bowl. In a separate bowl, whisk the buttermilk, vinegar, vanilla, and food colouring together until blended.
In a large bowl, cream the sugar and butter until light and fluffy. Add the eggs, one at a time, beating well after each addition. Beat in the flour mixture, a third at a time, alternating with a third of the buttermilk mixture until all is mixed in.
Divide the mixture between the paper cases. Bake in the centre of the preheated oven for 20 minutes until springy to the touch. Remove and turn the cakes out onto a wire rack to cool.
To make the frosting, beat the butter and cheese until creamy. Add the icing sugar and beat until combined. Split the half vanilla pod and scrape out the seeds into the frosting. Add the vanilla extract.
Spoon the frosting into a piping bag with a star nozzle and ice the cupcakes. Start from the outside and work in towards the middle. Decorate with coloured sprinkles.
Xanthe Milton will be hosting a programme of LIVE competitions during the three days of the show, where you can come and have a go at piping swirls and advanced piping techniques, including rose swirls, on two tier cupcakes.  Six people can have a go per session, with the most professional looking cupcake winning a special prize.

﻿ OTHER SHOW FEATURES INCLUDE:
Celebrity bakers including Mary Berry, Paul Hollywood (London only) and 2012 Great British Bake Off winner, John Whaite The Baker's Dozen Theatre where there will be 12 cooking stations, each with their own equipment and ingredients, and experts on hand to guide you through step-by-step recipes for you to make there and then - and to take home and enjoy.

Over 80 exhibitors from across the globe will be offering the very latest cake decorating and sugarcraft supplies. Demonstration Theatres where you will find some of the greatest sugarcraft and cake decorating talents from home and abroad.

Guest chef, Paul Da Costa Greaves with his favourite recipes in The Bakery Theatre. A Taste of Sugar Mini-Workshops, which has been specially designed to help sugarcrafting newcomers and juniors learn fantastic cake crafting techniques. International Guests and experts in sugarcraft, cake decorating and baking.

Make sure you pop along to the original cake show, Cake International - The Sugarcraft, Cake Decorating & Baking Show where you can see your favourite stars and pick up top tips and recipes straight from the experts!  Please visit www.cakeinternational.co.uk for more information.
Events and happenings news. People in food Recipes