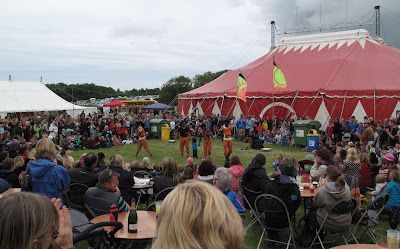 Acclaimed chefs and award-winning Cornish food producers are among the line up announced for the fourth Rock Oyster Festival, taking place from Friday 21 to Sunday 23 June 2013.

Fantastic food combines with eclectic music and a host of children’s entertainment at this mid-summer celebration held on the banks of the Camel Estuary in North Cornwall.

Jack Stein, head of development at The Seafood Restaurant said: “This is my first time demonstrating at Rock Oyster Festival and I am really looking forward to it. It is a really unique event in an amazing location and of course the food and drink on offer represents a lot of what makes Cornwall such an amazing place to be a chef.

“I suspect I’ll spend most of my weekend eating Porthilly oysters and drinking Cornish ale! I spent a large part of my formative years in and around Polzeath and have many close friends across the river to catch up with over the weekend.”

Rock Oyster Festival brings together the best of Cornish food and produce, music and entertainment.
Other local chefs on stage are The Seafood Restaurant’s David Sharland and Stephane Delourme; James Nathan (Masterchef 2008 winner) from The Green Room at Retallack; Ian Percival from the St Moritz Hotel and Jamie Porter from Rafferty’s in St Merryn.

Festival goers can take their pick from a smorgasbord of food and drink, with local restaurants including Rick Stein’s Seafood Restaurant running food stalls alongside local producers such as Kernow Sausage Company, Rock Shellfish and the Brownie Baker.

Local producers will also be giving talks and masterclasses in the Food Surveys’ Food Academy about subjects from oysters and meat curing, to hand-made pasta and the art of foraging.

The Cornish beer tent will be a fantastic showcase for twelve independent Cornish brewers keeping revellers refreshed throughout the weekend.

Festival organiser Charlie Anderson said: “We have such a wealth of culinary talent in this area of Cornwall and it seems natural to celebrate it at the festival. This year our demonstration tent will be even larger and we have a new woodland glade stage.

“We have also spent a lot of time choosing different up and coming music acts and quality children’s entertainment. We want to create a really magical boutique festival experience for all the family and I think we have done just that.”

The festival is known for showcasing a wide-ranging blend of music and this year's lineup is no exception. Highlights include gypsy pirate punk band Seas of Mirth, Smerins Antisocial Club and 14 piece Slamboree, whose music is described as a mixture of pyro circus cabaret. Sunday has more of a folky sound with acts such as Half Sisters, who appeared at Port Eliot Festival and Martha Tilston on stage.﻿﻿

Famed for its family-friendly feel, Rock Oyster Festival has a designated children’s area where little ones can indulge in activities like bush craft, enjoy circus acts, dance to disco and learn how to scavenge on the seashore. There is also a dedicated tent for baby changing and breast feeding.

The last few weekend early bird tickets are on sale at a price of £45 for an adult and £10 for a child. Full price tickets to the festival will then be available. For more information and to purchase tickets visit: www.rockoysterfestival.co.uk.
Events and happenings news.