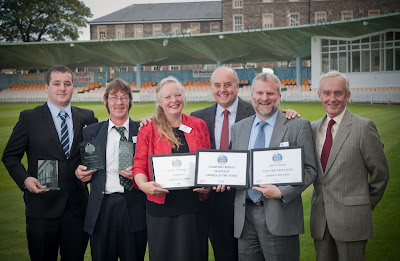 The passion and success of the South West food and drink industry was clear for all to see at the Taste of the West Awards' Ceremony on Tuesday 15th October. The ceremony took place at The Bristol Pavilion, the home of Gloucestershire County Cricket Club, and saw the 166 Gold award-winning products competing for the 22 'Best Of' category awards and prestigious 'Champion Product'. Dorset's Capreolus Fine Foods was victorious, taking home the coveted 'Champion Product' for their Guanciale.

Capreolus Fine Foods wowed judges in August during the 'The Product Awards' winning an unprecedented ten Gold awards from ten entries in the 'Cured Meat' and 'Bacon' categories, a first in the history of 'The Product Awards'.  Their success continued at the awards' ceremony winning the 'Best Of' award in the 'Bacon' category for their Black Strap Streaky Bacon and the 'Best Of' award in the 'Cured Meat' category with their Guanciale, the 'Champion Product'.

The Watercress Company Ltd continued Dorset's triumph winning both the 'Best New Product' accolade and 'The Carol Trewin South West Producer of the Year' award, which recognises an entrepreneurial and successful food and drink producer.  A Dorset Producer also won the 'Best Of' award in the 'Wines, Spirits & Liqueurs' category, which was won by Pure Milk Vodka Ltd for their 'Black Cow' (vodka).

Commenting on behalf of Taste of the West, chief executive John Sheaves says: "For a county to win so many highly esteemed awards including the 'Champion Product' is an absolutely remarkable achievement.

We have never experienced anything quite like it. Capreolus Fine Foods has swept the board in every relevant category and entirely deserves to have been given the highest accolade possible."  John continues: "The level of entries from all the producers and hospitality and retail outlets in the South West this year has been exceptional."

Somerset's Bridgwater College received the 'Local Food in Schools and Colleges' award for their high level of commitment to sourcing and educating pupils about healthy, locally-sourced food. The Devon producer Hillside Speciality Foods was awarded the 'Best Of' Packaging Award and Highfield Preserves Ltd's Apple Mint with Cider Jelly was named 'Best Of' Savoury Preserves.

Wiltshire saw Walter Rose and Son win 'Best South West Butcher'.  Whilst in Cornwall, the 'Best South West Local Food Takeaway' went to the The Cornish Pizza Company and 'Best South West Online Retailer' was won by Wing of St Mawes. During the last few months a panel of anonymous, independent expert judges visited all the registered establishments. Gold, Silver and Bronze Awards were awarded on merit, based on a scoring system.  The judges' criteria included looking at the extent of local sourcing, communication of local sourcing in the establishment, quality and speed of service, quality of meal, atmosphere and ambience of the place and value for money.

The ceremony lunch was enjoyed by 300 movers and shakers in the food and drink industry, which included producers, top retailers, hospitality establishments, food writers, buyers and leading chefs. Those attending enjoyed a drinks reception, sponsored by Smith & Williamson, followed by an outstanding three course lunch which showcased a fantastic selection of winning products.  The awards were presented by owner of Rockfish and Dartmouth's The Seahorse, fish chef extraordinaire, Mitch Tonks, who had sampled these top 22 products to find this year's 'Champion Product'.

These results follow the earlier announcement of all the Taste of the West Product Award winners.  Out of a hugely impressive 1040 products entered into the awards, 166 won a Gold Award, 216 were awarded a Silver Award and 213 were given a Bronze Award.  An impressive twenty-seven of these Gold Award winning products were from Dorset.

The 'Product Awards' were made up of 25 classes. Judges evaluated each product individually, assessing its appearance, aroma, texture, packaging and, most significantly, its taste. Gold, Silver and Bronze Awards were awarded entirely on merit and judges were not limited on the number of awards that could be given.

Products which won Gold Awards were judged a second time by a further panel of judges to identify the winners of 22 'Best Of' category awards with the esteemed 'Champion Product' chosen from these winners.
For further information on all the awards visit Taste of the West's website: www.tasteofthewest.co.uk; follow @Tasteofthewest on Twitter or 'like' Taste of the West on Facebook.

Taste of the West is responsible for joined up marketing of food and drink from the West Country and has:

- Developed a strong brand for the region
- Has a comprehensive industry based awards programme
- Has a dedicated trade show in its name (working with events partner - Hale Events) bringing together over 120 producers annually
- Recognises the region's hospitality trade in the South West Chef of the Year awards.
- Organises the UK's largest regional food and drink awards programme of its kind. Over 1,000 products are judged annually with nearly 300 hospitality establishments

Ensuring that consumers recognise and buy regionally sourced produce, Taste of the West has helped to showcase the best of the South West's food and drink at public events across the region. After developing and running the Exeter Food Festival successfully for 5 years, increasing visitor numbers year on year, Taste of the West now runs TorqEat - the Torquay Food Festival, the Dartington Food Fair and the Cotehele Christmas Show as well as assisting with the Ottery St Mary Food & Families Festival and the Tiverton Balloon & Music Festival.
Awards