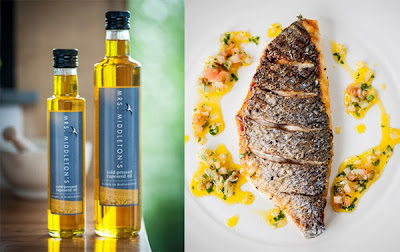 An artisan rapeseed oil producer has secured two new distributors and a host of new stockists after a successful first summer.

Mrs. Middleton’s cold-pressed rapeseed oil is now available throughout South West England, London and the South East thanks to new distribution deals with Total Produce and House of Westphalia.

Based in Cornwall and Bristol, Total Produce supplies restaurants, hotels and independent retailers across the South West, while House of Westphalia focuses on distribution to customers in London and the South East.

Sisters Whizz Middleton and Ellie Michell started producing Mrs. Middleton’s oil in December 2012 from rapeseed grown on their 2,000 acre family farm, which surrounds the Barton Hills Nature Reserve in Bedfordshire. The farm boasts some of the best arable land in the country, producing top quality rapeseed, wheat and barley.

Danyel Mills, managing director of House of Westphalia division Medallion Chilled Foods, said: “I was motivated by the fact that Mrs Middleton’s Oil is a new business that we could help to grow. We have never sold oils before but we were impressed by Mrs Middleton’s classy, understated packaging and established customer base.

“It’s great to be able to sell local produce. Barton Hill Farm is only four miles away from us and you aren’t going to get much closer than that. We liked that we could use Mrs Middleton to sell Mrs Middleton’s oil. No one can sell it better than her, because it is hers. It’s great to have that personal connection.”

Cold-pressed rapeseed oil is becoming increasingly popular as chefs and home-cooks discover how healthy, delicious and versatile it can be. With only half the saturated fats of extra virgin olive oil and high levels of omegas 3, 6 and 9, essential fatty acids and vitamin E it is an ideal British alternative to European olive oils.

Danyel added: “I was particularly interested in the health benefits of cold-pressed rapeseed oil. It’s good to have a clear point of difference over the more widely distributed, trendy olive oils.”
The number of chefs using the oil and stockists has grown significantly over the past three months and much of the transportation is now being carried out by distributors.

The oil is currently stocked at around 60 farm shops and delicatessens across the UK and is also on the menu at restaurants including Michelin-starred restaurant Paris House in Woburn, Bedfordshire; five-star hotel with a two AA rosette restaurant, Luton Hoo; The Clarendon in Chandler’s Cross and Angela Hartnett’s Whitechapel Gallery Dining Room in London.

Nick Matthews, regional director of Total Produce, said: “We chose to stock Mrs Middleton’s Oil in our depots throughout the South West because not only is the product fantastic but they’re also great people to work with. It also helps that the product is very popular with our client base.”