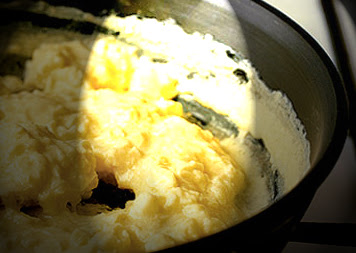 Now this sounds to be a very easy thing to do and I think it is. However, in the world of cooking the actual thins that is simple are often the most talked about and fought over. Therefore, to avoid getting every one up in arms and saying you do not do it like that, you do it like this I will simply just tell you what I do and that will be that.

For one person you will need
Three eggs.
Some butter
A little cream or milk
Black pepper, preferably freshly ground black pepper and salt.

Take your eggs and crack them in to some kind of blow or container. Now all you have to do is just beat the eggs a little. You do not want a frothy mass of egg all you want is the yolks to be incorporated in to the whites. Nothing more than this is necessary for just a simple scrabble egg.

Now this next stage is only for the occasions that you are doing some thing like scrabble eggs with a starter. Say if you was doing scrabble eggs will fresh dill and smoked salmon on a slice of toasted brioche.

If you were going to do, some thing like that then I would pass the beaten eggs threw a fine sieve of some kind. This way you take out the large white bit that attaches its self to the egg yolk called the Chalaza I believe. There is nothing wrong with it but it just cooks out white and does not have a nice yellow finish. So if you are looking for that perfect finish then pass it threw a sieve. If you are not bothered then don't.

So all depending on what you are wanting to be doing the next stage is to cook the egg. Now I do not mind if you use a saucepan or a frying pan. All I would say is if you have some thing with a thick bottom the better so that it prevents the egg from sticking and burning as you cook it. Take your pan and put it on to heat threw on a moderate heat. As it does put a small amount of butter in the pan and allow it to melt .Now the thing is to melt the butter and not to burn it, so keep an eye on it. Once that it has melted then you add the egg.

Now just let it cook for a while. Cook it so it starts to firm up and allowing the egg proteins to set. Once that has started take a spoon or a spatula and stir the egg around. You are not looking to over work this egg mix. I do not like to see a fine grain to my scrabble egg but some form and texture to if. Do this a coupe of times to stop the egg from sticking and to help all the egg cook evenly.

Now how long you cook the egg is up to you but I do like my egg rather on the under cooked side. So I simply remove from the heat and add whatever seasoning I feel that it required. For me a little salt and a lot of fresh ground black pepper.

Then serve it as you would like it to be served. My favourite way is on some fresh white toast, with streaky bacon over it all. Cook the bacon until very crispy place on a little paper towel before placing over the egg and hay presto a break fast fit for a king
Breakfast Eggs Recipes snack