Launch For Curry Capital Of Britain 2014 - Can Bradford Do It Again? 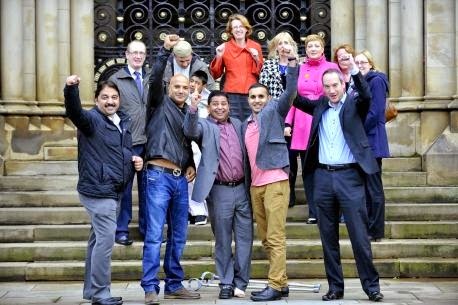 It is that time of year again when curry fans all over Britain make their voices heard by voting for their favourite curry restaurants in 21 of Britain 's top curry centres.

For the first time since the competition started 12 years ago as part of National Curry Week (13-19 October) it will be without four times winners Glasgow which has brought so much fun and enthusiasm to the event over the years. The home of deep fried Mars Bars and Pakora Bars (and Chicken Tikka Masala if some claims are true) is understandably concentrating on the Commonwealth Games for 2014 but will undoubtedly be back with a bang in 2015.

Voting opens on vote@fedrest.com today 28th April and from now until mid August hundreds of thousands of curry fans will vote for their favourites to represent their city as one of the four team members chosen to be scrutinised by the judges. From mid August throughout September the team restaurants are subjected to scrupulous, secret judging and assessment. These reports are then combined with submissions from city councils and marketing bodies as to why their city should be the winner this year with the final result announced in October after National Curry Week.

Last year the winning team of restaurateurs from Bradford joined their council colleagues to accept the trophy on board a special curry cruise on a Mississippi style paddleboat on the River Thames . This was the third year running that Bradford had carried off the trophy and the fourth time overall to equal the success of Glasgow . With Glasgow absent this year the excitement centres around which city will prevent Bradford continuing their record breaking run.

Said Federations of Specialist Restaurants organiser Peter Grove, "the curry scene has certainly changed over recent years with the growth of supermarket involvement and home cooking but there is no sign of any diminution of Britain's love for the spicy cuisine and exciting trends in many of the newer restaurants suggests the 'currification' of Britain will continue."
Competing cities for 2014 are :

Main sponsors of the event are again online specialists hungryhouse.co.uk supported by
Sainsbury's and Kingfisher Beer and information about Curry Capital and the other fun National Curry Week events can be found on www.nationalcurryweek.co.uk. If you are part of the growing Great British curry family get voting now.
Awards Indian news.