Aphrodisiac Tasting Menu At The Ambrette 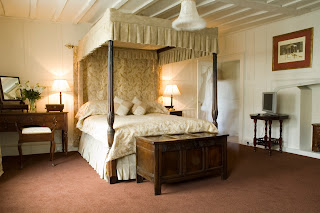 The Ambrette Restaurants in Rye and Margate are to serve a special 8-course sampler menu priced at £40 on Sunday 17th February, using ingredients reputed to have strong aphrodisiac qualities.  Indeed, The Ambrette is named after an Indian flower, renowned for its positive effects on the libido.

The lightly spiced dishes at The Ambrette promises a very different dining experience where guests taste the real herbs, rather than have their flavours overwhelmed by strong spices.

A keen student of Indian cookery, Biswal has learned how aphrodisiacs are intrinsic in the social fabric of a country that portrays itself to be highly conservative.  The tradition of chewing a betel leaf before bed time or serving a glass of milk laced with saffron before the wedding night, are typical examples of how Indians harness the properties of “love potions”.

Dev believes that along with many other things in Indian culture, aphrodisiac ingredients enjoy a sort of immortality in time.

“The skills and knowledge are never lost, they flow incessantly from generation to generations, said Dev, adding, “Traditional chefs are these strange groups of mystic men who secretly guard their knowledge.”

The night’s menu has been created to maximise use of ingredients known for their romance-inducing properties. Celery contains the male hormone testosterone, which also has a powerful effect on women’s libido. Carrots, fennel and onions also affect sex drive. Aswagandha, “The King” of India spices is a “ herbal miracle” that works on reproductive and nervous systems as a sexual and energy tonic with a rejuvenating effect. Basil stimulates the sex drive, boosts fertility and produces a general sense of well-being.

The south Indian seafood extract “Rasam” is made with fresh local scallops, tiger prawns and mussels flavoured with asafoetida. Shellfish have traces of zinc, which stimulates sex drive.

In laboratory studies Asafoetida, has been compared favourably to sildenafil, known by the brand name Viagra.

Ginger is mentioned in part seven (under occult practices) of the Kama Sutra. History attests to coriander’s mystical aphrodisiac potency. The Chinese used the herb in love potions.

Among the Arabs nutmeg has been used to treat digestive problems and also been valued as an aphrodisiac; The Hindus embraced the spice for its  sensual properties as a stimulant in raising body heat and sweetening breath.

Coconut and tamarind seeds used are said to Improves sexual potency and fertility.

Betel is prescribed by ancient Ayurvedic physicians because of its deodorant, aphrodisiac and invigorating properties. Betel leaf came to form a part of the ritual with which a wife welcomed her husband.

Cardamom contains at least two androgenic compounds. It shows up as the best source of the compound cineole – a stimulant on the central nervous system stimulant.

Part of saffron’s magical property is the enhancement of “lust”. Saffron is capable of affecting the neurotransmitters. Its ingestion is found to be a soothing relaxant capable of lowering blood pressure and stimulating the respiration. Its properties also appear to stimulate the libido and the erogenous zones.

As a child Dev spent a lot of time in Orissa, a magical land with parts lost in time. The temples are covered in highly erotic and beautiful carvings of men and women – sometimes in groups – from the Kama Sutra, the ancient Indian text on human sexual behaviour. He had never seen such an energetic celebration of the sexual energy. These temples were built in the pre Islamic periods when people enjoyed sexual freedom in society. These stone sculptures used to baffle Dev’s adolescent mind, asking, “If sex is sinful, then how come the abode of the Gods are covered with sexual impressions”