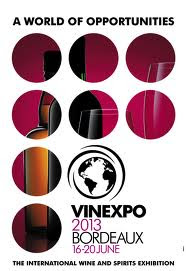 London, February 5, 2013 – British wine drinkers are drinking more sparkling wine than ever and in five years time will consume more than 126 million bottles of French Champagne, Spanish Cava and Italian Prosecco as well as other countries’ fizz reveals VINEXPO, organisers of the world’s biggest wine and spirits exhibition.*

The increase will put Britain in the top spot worldwide for imports of sparkling wine, pushing Germany, the previous leader, into third place after the USA. In 2011 the UK’s top five suppliers of sparkling wine were France (37 million bottles) Spain (35 million) Italy (19 million) Australia (8.5 million) and South Africa (2.5 million).

For the first time, consumption of white wine is forecast to overtake red wine. By 2016 white still wine will account for nearly 45% of all still wines drunk, while Red wine will fall to just over 42%. Drinking of Rosé wine, which saw a rise 6% in recent years, is forecast to fall 2.5% in the next five years.

The data is revealed in research published today by VINEXPO and commissioned from International Wine and Spirit Research (IWSR). IWSR data has been shown to be highly accurate over the years with variations between forecasts and outcomes of less than 1%. More than 1300 UK wine and spirit professionals are expected among the  50,000 international visitors when VINEXPO opens its doors from June 16 to 20, 2013.

At the same time as the decline in total wine drunk, the value of UK wines sales will fall over the next five years from GBP8.2 billion to GBP7.9 billion. However, the average price per bottle of still wine is forecast to rise to over GBP6 at rsp by 2016.

UK consumption per person will fall from 24.3 litres of wine to 23 litres over the next five years. The UK is ranked tenth in the world for per capita wine consumption. The top five wine drinkers in 2012 were: France (52.4 litres per head) Italy (51.6 litres) Switzerland (47.5 litres) Portugal (45 litres) Denmark (37.5 litres). Wine drinking per person in all five countries is set to fall over the next five years by between 3% and 6%, except for Switzerland where it will remain constant.

UK is world’s top buyer
Despite the decline, the UK is still the world’s biggest retail market for  imported still wine by value and likely to remain so. While imports will fall in value, by 2016 at BGP7.9 billion they will be more than half the size again of the USA, the world’s number 2 importer.  American imports will grow 10% to reach BGP5.3 billion in five years’ time.

Australia is UK’s top supplier
While imports of Australian still and sparkling wine fell 18% between 2007 and 2011, Australia is still the UK’s largest supplier by volume at 306 million bottles (25.5 million cases). Over the same period Italy moved into second place with 19.5 million cases – a 28% increase – over France which fell 13% to 19 million cases.

The biggest increases in that period were shown by Spain which grew UK imports by 22% to 12 million cases, and New Zealand – albeit from a much smaller base – which pushed imports to the UK over 80% to 4.8 million cases.

Scotch falls at home, rises abroad
Vodka is by far the UK’s most popular spirit, but growth is showing signs of petering out. Consumption of 108 million bottles (9 million cases) is forecast to fall over the next five years by 4%.

Rum and Bourbon will buck the trend by showing growth. Rum is forecast to increase sales by nearly 3% in the next five years, while Bourbon is set to grow more than 9%.

M. Robert Beynat, CEO of VINEXPO, said: ‘The data reveals how UK drinkers are changing their behaviour. They are drinking less but spending more on better wine. They fact remains that the UK is still the world’s biggest importer of wine and therefore a major force in world wine business. It is the ambition of many world wine-makers to gain a foothold in the UK.

“As regards spirits, while Scotch whisky consumption will fall, sales overseas are booming and set to rise over the next five years.”

*VINEXPO 2013, takes place at the Parc des Expositions in Bordeaux, France, from June 16 to June 20, 2013. The biggest professional wine and spirits exhibition in the world, it features 2,400 exhibitors from 45 countries and 50,000 visitors from 135 countries, as well as more than 1,200 journalists from daily newspaper, magazines, radio and TV.
Drinks Events and happenings Wine