Chop, Slice And Dice Your Bramleys To Create Some 'Devilishly' Delicious Dishes 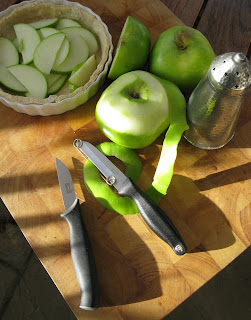 When it comes to peeling and slicing Kitchen Devils know their onions and most certainly their apples.  The Bramley Apple variety is over 200 years old and still ignites the imagination of cooks and chefs nationwide. To help celebrate Bramley Apple Week (3-9 February) we've got some 'Devilishly' tasty recipes courtesy of www.bramleyapples.co.uk including Parsnip & Apple Soup, Sticky Toffee Apple Puds and Bramley Apple and Sultana Teabread.

The first place to start when cooking with Bramleys is to peel them. The Kitchen Devils Peeler/Paring knife is a great two in one gadget (RRP £4.49). Once you've peeled your apples, just unclip the detachable peeler and slice as required.

For perfectly sliced and evenly diced apples check out the Kitchen Devils Control Paring Knife (RRP £5.49). This award-winning range is superb quality, lightweight and stylish and has a reassuring 15-year guarantee.

Method:
Gently cook the parsnip in the butter, in a covered pan for about 5 minutes giving the occasional stir and not allowing them to colour then remove the lid, add the apples and vegetable stock and bring to the boil. Season and simmer gently for about 15 minutes until the parsnip is soft.

Blend in a liquidiser until smooth and strain through a fine meshed sieve. Bring back to the boil, add the double cream and adjust with a little water or stock if it's too thick.

Place the oats and sugar into a bowl, add the grated apple, juice and oil, mix well and then leave for 15 minutes.

Spoon the mixture into a greased and lined 1lb loaf tin.

Bake for 45 - 50 minutes, then remove from the oven and cool slightly.

When cool, slice and serve.

Ingredients
100g/4oz softened butter
100g/4oz light soft brown sugar
100g/4oz self raising flour
2 medium eggs
4tbsp milk
225g/8oz Bramley apples, peeled, cored and diced
Sauce:
100g/4oz toffees
150ml/¼pt double cream
Method
Place butter, sugar, flour, eggs and milk together in a large bowl. Use an electric whisk to beat together until smooth. Stir in the apples.
Divide the mixture between 4 greased microwave proof ramekins or teacups. Arrange the cups in a circle on the turntable and microwave on High for 3-3 ½ mins or until the surface of the sponges looks almost dry. Stand for 5mins.
Place the toffees and cream together in a bowl. Microwave on High for 2-3 mins, stirring occasionally until the toffees have melted and a spoon sauce forms.
Turn out the sponges on four dessert plates, spoon over the sauce and serve hot with custard.
To cook conventionally: Preheat the oven to 180oC/Fan 160oC/350oF/Gas Mark 4. Spoon the mixture into 4 (175ml/6floz) buttered dariole moulds.  Cover with folded pleated baking parchment and foil and stand in a roasting tin.  Pour boiling water to come half way up the outside of the moulds and bake for 30mins.  Heat the toffees and the cream together in a small pan until smooth sauce forms.
Fruit news. Recipes