No Curry At "Best" Indian Restaurant In South East 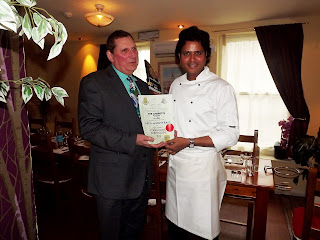 The Ambrette Restaurants Margate and Rye have been named “Best in the South East” by the Cobra Good Curry Guide – despite not serving curry.

“Of the UK’s 9,000 Indian restaurants in the UK, The Ambrette is one of the elite few - it is a fantastic achievement,” said Pat Chapman, Editor of the Cobra Good Curry Guide, who visited the Kent restaurant to present chef-patron Dev Biswal with the covet award.

Biswal hopes that his latest accolade will encourage the next generation of Indian chefs and restaurateurs to move away from a “de facto franchise model” where almost every high street curry house offers a near identical menu.

Despite being listed in all the major restaurant guides and having won numerous awards, Biswal feels that the Cobra Good Curry Guide tribute is the pinnacle.

“Because we don’t serve curry or have any of the usual dishes like Chicken Tikka Masala or Lamb Korma on our menu, I never expected my cooking to be recognised by Pat’s curry bible,” said Dev, adding, “I have great respect for the Bangladeshi community, as the pioneers of Asian food in this country, producing undoubtedly tasty ‘curries’, but much of the Indian food served here is stuck in a 1940’s time bubble.”

Dev does not like word ‘curry’, a term which does not exits in any of the languages of the subcontinent, to describe such a vast array of culinary styles and foods which are found across India.

Now in its 30th year, the new 2013 edition of Cobra Good Curry Guide 2013 has just been published. The Guide's strap line is "Britain's Top Restaurants as chosen by you", and the information is compiled with the help of hundreds of members of the public The A5 size paperback has 384 full colour pages, Each restaurant entry contains details on food style, quality, price, service, vegetarian availability, BYO, takeaway information, home delivery service and more. New features include website details and postcodes to assist navigation.

Amongst the 1,000 entries are two further distinctions, the A-List which identifies those restaurants which are well above average and Top 100 List which is a second tier of high achievers.  The Guide's definitive menu glossary has been updated to reflect increasing regional and more sophisticated offerings. Also featured is an alphabetical town index and county maps.

Pat Chapman founded the Curry Club in 1982, to share information about recipes, restaurants and spicy foods. His network of reporters led to the publication of the Good Curry Guides. Among its fans are broadcaster Sir David Frost, 73. He said of the guide: "It tells you everything you want to know about curry." And celebrity chef Delia Smith, 71, wrote: "With it he has done the nation a real service.”
Awards news. Press Release.