Toad In The Hole With Gorgonzola 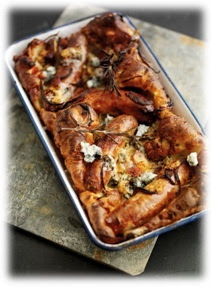 This winter warmer dish is delicious and perfect for those cold nights. To make, simply blend the ingredients for the batter and rest. Heat a large roasting tin in the oven and add sausages, red onion, lardons and cook until browned. Remove the dish and pour the batter mix around the sausages and sprinkle with crumbled Gorgonzola piccante and rosemary.  Return to the oven and cook for 25-30 minutes until risen and golden.

Gorgonzola is a high quality cheese guaranteed by production rules with an unmistakable aroma and taste and a history which allegedly dates back to the eighth century. There are currently 40 dairies and over 3,000 farms making milk for the production of Gorgonzola cheese!

By law and tradition, Gorgonzola cheese can only be produced in the following provinces: Novara, Vercelli, Cuneo, Biella, Verbano Cusio Ossola, and the area of Casale Monferrato within the Piedmont region, and Bergamo, Brescia, Como, Cremona, Lecco, Lodi, Milano, Monza, Pavia, and Varese within the Lombardy region.
﻿
Only high quality cows' milk produced in these provinces may be used to make Gorgonzola and to grant the cheese its PDO certification. PDOs are defined and protected by European Union law in order to defend the reputation of national foods.

Gorgonzola is recognised by a marked 'g' on the aluminium foil that protects the cheese and can only be applied by producers authorised by the Consortium. The label of origin branded on the cheese wheel also guarantees the quality and authenticity of the product.

Gorgonzola has excellent nutritional properties; it is extremely rich in vitamins and minerals such as calcium, iron and phosphorus. It is also a highly versatile product which can be used in a wide range of recipes including appetisers, main courses, and even desserts.

Toad in the Hole with Gorgonzola

8 Cumberland sausages
½ red onion, sliced
150g smoked bacon lardons
125g Gorgonzola piccante, roughly crumbled
2 tbsp rosemary, roughly chopped
Sunflower or vegetable oil
Batter:
3 large eggs
110g plain flour
280ml whole milk
Preheat the oven to its highest setting (250oC)
Blend together all the ingredients for the batter and rest for at least 30 minutes
Meanwhile, pour enough oil to cover the base of a large roasting tin or oven-proof dish. Heat in the oven and then add the sausages, red onion and lardons. Cook until browned and the oil is smoking hot once again
Remove from the oven and as quickly as possible, pour the batter mix around the sausages and dot over the Gorgonzola and rosemary. Carefully return to the oven and cook for 25-30 minutes until risen, crisp and golden
http://www.gorgonzola.com/uk
news. Recipes