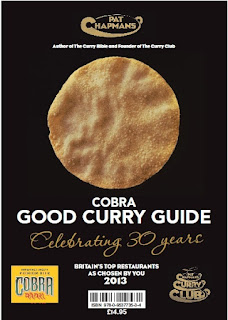 Curry-crazy Brits will blow more than £30,000 on Indian grub in their lives, the Curry Club can reveal.

The average Brit will splash out £20 a month cooking Indian food at home, according to new research. They will also fork out £31.44 eating the spicy dishes in restaurants over the same period, according to The 2013 Cobra Good Curry Guide. This means that over a 50-year period we will each spend £30,864 on curries. And, despite the recession, the guide claims curry houses are thriving as the UK refuses to give up its favourite food.

The UK's 9,000 curry restaurants attract 2.5 million customers a week, according to Curry Club statistics. And the curry sector is worth about £777 million each year, despite a fall of 20 per cent since the economic downturn began.  Pat Chapman, author of the Guide is confident the industry will ride out the current recession.

He added: "There is doom and gloom being talked about all restaurants incuding ‘Indian’.  They're being hit by the recession like everyone else. But in the long run it will be good for the sector. We will see weaker restaurants go to the wall. But those that offer good food, good service and good value will survive."
There are close on 9,000 Indian Restaurants and Balti Houses restaurants in the British Isles.  But which are the top ones in London, and in every county in England, Scotland and Wales?

Now available the completely new Cobra Good Curry Guide, the 11th edition, identifies the nation's favourite food at 1,000 favourite venues. The Guide was established in 1983 and is in its 30th year. Cobra have been its exclusive sponsor continuously since 1992. It is the only in-print national critical guide and is regarded by media and the restaurants alike as the definitive work of its kind.

The internet provides copious restaurant information, but its informants and critics are largely anonymous and therefore the reliability of their reports lack credibility. The Guide's strap line is "Britain's Top Restaurants as chosen by you", and the information is compiled with the help of hundreds of members of the public, all of whom are listed in full and many of whom have been reliably reporting for years.

Amongst the 1,000 entries are two further distinctions, the A-List which identifies those restaurants which are well above average and Top 100 List which is a second tier of high achievers. The Guide's introduction continues the tradition of carrying fact and fun features including a 30 year look-back on the Curry Club's history, the Currination, a light-hearted look back on our nation's currinary activities since the last edition, a Cobra recipe section and a survey of unusual pickles. The Guide's definitive menu glossary has been updated to reflect increasing regional and more sophisticated curry offerings.  Also featured is an alphabetical town index and county maps.

The latest edition of the guide reveals West Yorkshire is the strongest performing area outside London with 14 entries in the top 100. And other well-known curry capitals, such as Birmingham and Manchester, also feature strongly in the list. Mr Chapman added: "These areas are traditional strongholds. But, as the book shows, there is an even spread of quality restaurants across the country. It's my job to whittle identify them."

This year the top curry award has gone to the Painted Heron in Chelsea. The capital does well in curry charts but other areas of the country have won rave reviews for their restaurants. Moksh in Cardiff, and Massala in Cobham, Surrey and The Ambrette in Margate, Kent and Rye, East Sussex are cited the best in their respective regions.

Every restaurant listed in the Guide is entitled to display a 2013 wall certificate, signed by Pat Chapman.
Mr Chapman founded the Curry Club in 1982, to share information about recipes, restaurants and spicy foods.His network of reporters led to the publication of the Good Curry Guides. Among its fans are broadcaster Sir David Frost, 73. He said of the guide: "It tells you everything you want to know about curry." And celebrity chef Delia Smith, 71, wrote: "With it he has done the nation a real service.”